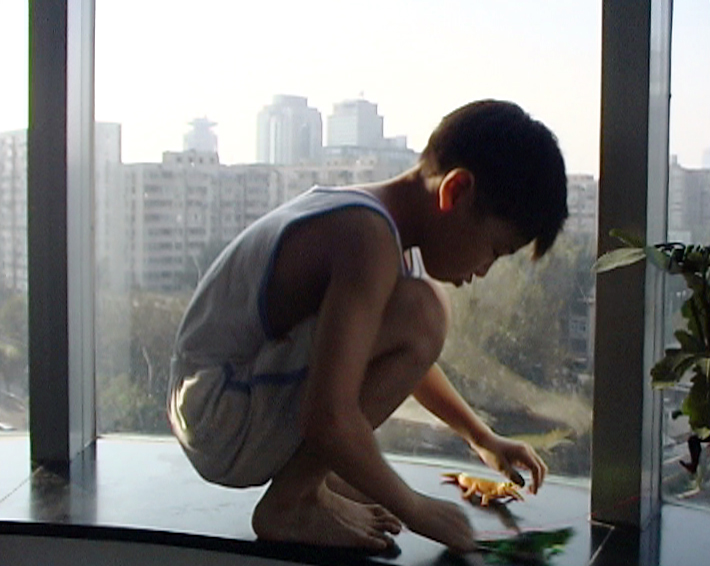 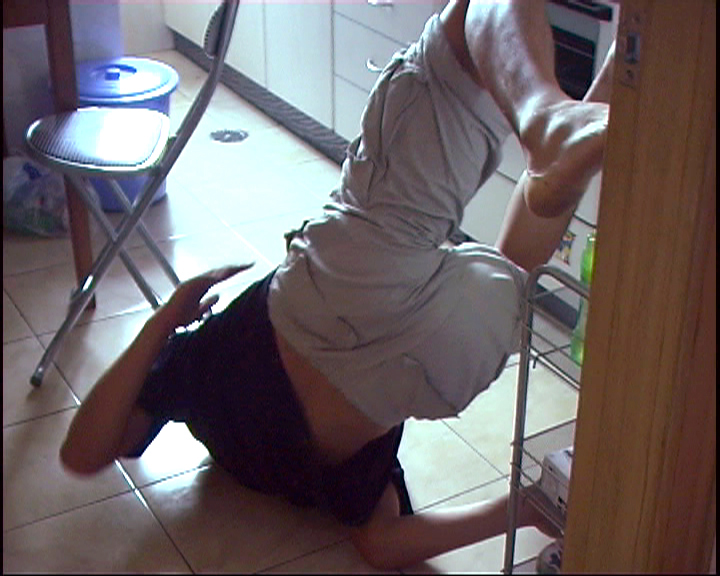 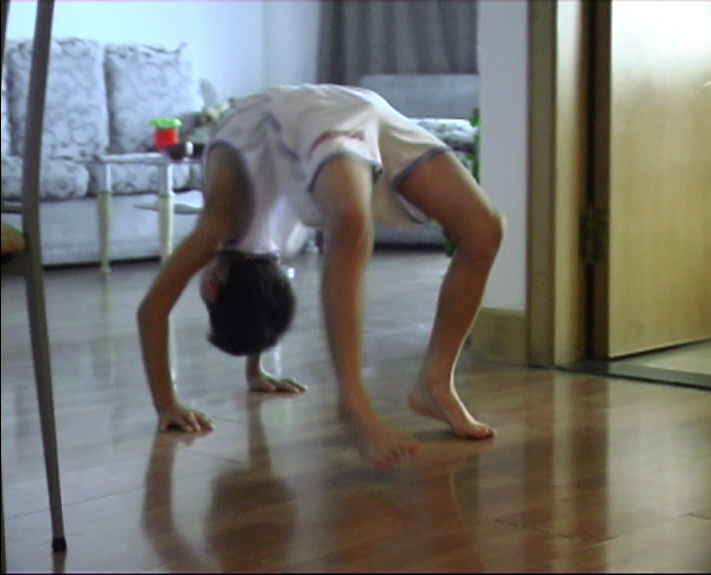 with Cui Tao, Zheng Chenggong
Growing up is about learning the rules of the current civilization. Part of that consists in reducing possible movements. A small child can still climb walls, jump and fall flat on the floor in public. If an adult did the same thing, people would stare at him. The civilization process assures that an adult would not even think of trying to do strange movements in private, where no one can see, with the exception of exercise or sports, which also follow a set of rules. Daily life routines in Beijing are changing rapidly, being transformed not only by new working conditions but also by new floor plans for private apartments.
In my short film No school today, (Video, 12 min, 2005) I wanted to try out what happens if the rules for movement are changed within the confined space of one of Beijing’s new, anonymous flats so that it gets used in a way it wasn’t intended.

A man and a child are living in one of the new apartment blocks. The flat is furnished in ‘international style’ with no specific taste, so you can’t guess the man’s profession or hobbies. The only exception is an oil painting of a rare desert stone hanging on the wall, which I painted myself. This painting reappears within the exhibition. Rare stones, or gongshi, are an old-fashioned collectors item in China; little pedestals are carved to hold them.

The man comes in with some soy milk for breakfast, puts it on the table and tries to wake the child up. The boy doesn’t want to go to school. He refuses to undress. The man gets angry. Until then the movements have been normal, but now the child manages to get away from the man with some acrobatic moves. For the next few minutes the man is trying to catch the boy, but now they have new rules for their movements: they can’t walk freely any more. The man can move only if he keeps attached to the floor or the walls with his whole body. Crawling forward, he becomes an animal-like menace to the child. The child can move forward by jumping or doing somersaults. The space becomes bigger for the child to hide in, because he can cross the room much faster than the man. While at first the two are angry at each other, later they start having fun and play it as a game. Finally the man gets hold of the child. He carries him piggyback. They leave the apartment, take the elevator down and vanish in the crowd of the street.

No school today was an experiment based on improvisation. I was working together with Cui Tao from the Beijing Modern Dance Company, and the 10-year-old Zheng Chenggong from Dongcheng Sports School, where he is learning martial arts.
(Artist Statement)